The National School in Hawes (NASH) 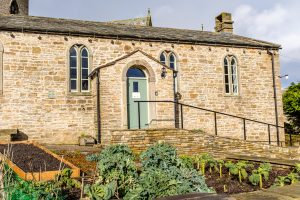 The NASH is the building behind St Margaret’s Church. You approach it as you walk on the Pennine Way at the north end of Bealah Bank.  It was built in 1845 as ‘The National School Hawes’ and was a church school for just over 30 years, after which it was used as a hall by local groups including the Sunday School, Guides, Brownies and Mother’s Union for most of the twentieth century.  Gradually it fell into a state of disrepair and was bought by its current owners in 2014.  After renovations it has now become a home and a studio space which is used for weekly dance lessons, arts and heritage projects and by the local Sunday School.  For more details visit the website https://www.thenashhawes.org/. 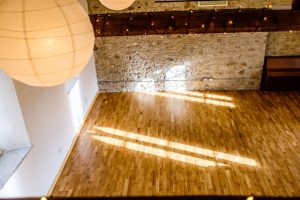 The development of local education and the National School

Early education in Hawes and the Upper Dale was through a series of private enterprises and schools. These ranged from a school held possibly in the Old Hall at Gayle by Matthew Wetherald in the early 18th century, to a  ‘Dame’ school held in the White Hart room by Sarah Hogg in 1823 and a school in the Quaker Meeting House by Mary Jane Clarke in 1867.

The Hawes Grammar School was established in 1729 with Rev Peter Dawes of Hawes being the prime mover in its development. It was built on the ‘Early Haw’ and the building is now used as a ‘Florist’. It originally provided for 45 students, five of those being ‘free places’ – the exact nature of these being disputed. The school closed in 1899, twenty years after the present Hawes ‘Board’ school was built and opened in 1879 along with schools in Widdale and Lunds. School fees continued to be charged in these schools until 1891.

Until this time, most schooling was beyond the reach of the local population and few children had any formal education. The establishment of National Schools in many parishes during the 19th century was a response to the growing demand for the education of young people.

The National School in Hawes was built on land called the ‘Maiden Haw Brae’ in 1845 and opened the following year. Money was raised by public subscription and the original committee included Rev E Howell (the then curate). As recorded by John Iveson, the headmaster between1871 and 1876, there were 100 pupils and two teachers – the junior teacher being untrained and unable to enforce discipline. Because attendance was not compulsory by law, absenteeism was common, especially during bad weather, around hay time and during fairs. There were also several outbreaks of contagious diseases which seriously affected attendance. Children would often stay away to watch things like local foxhunts or the building of the local railway.

However, at a time when education opportunities were limited, the National School met a real parish need. Literacy levels were significantly increased during its existence.

Acknowledgements to and for more information: Under Wetherfell, James Alderson; Wensleydale Press 1980