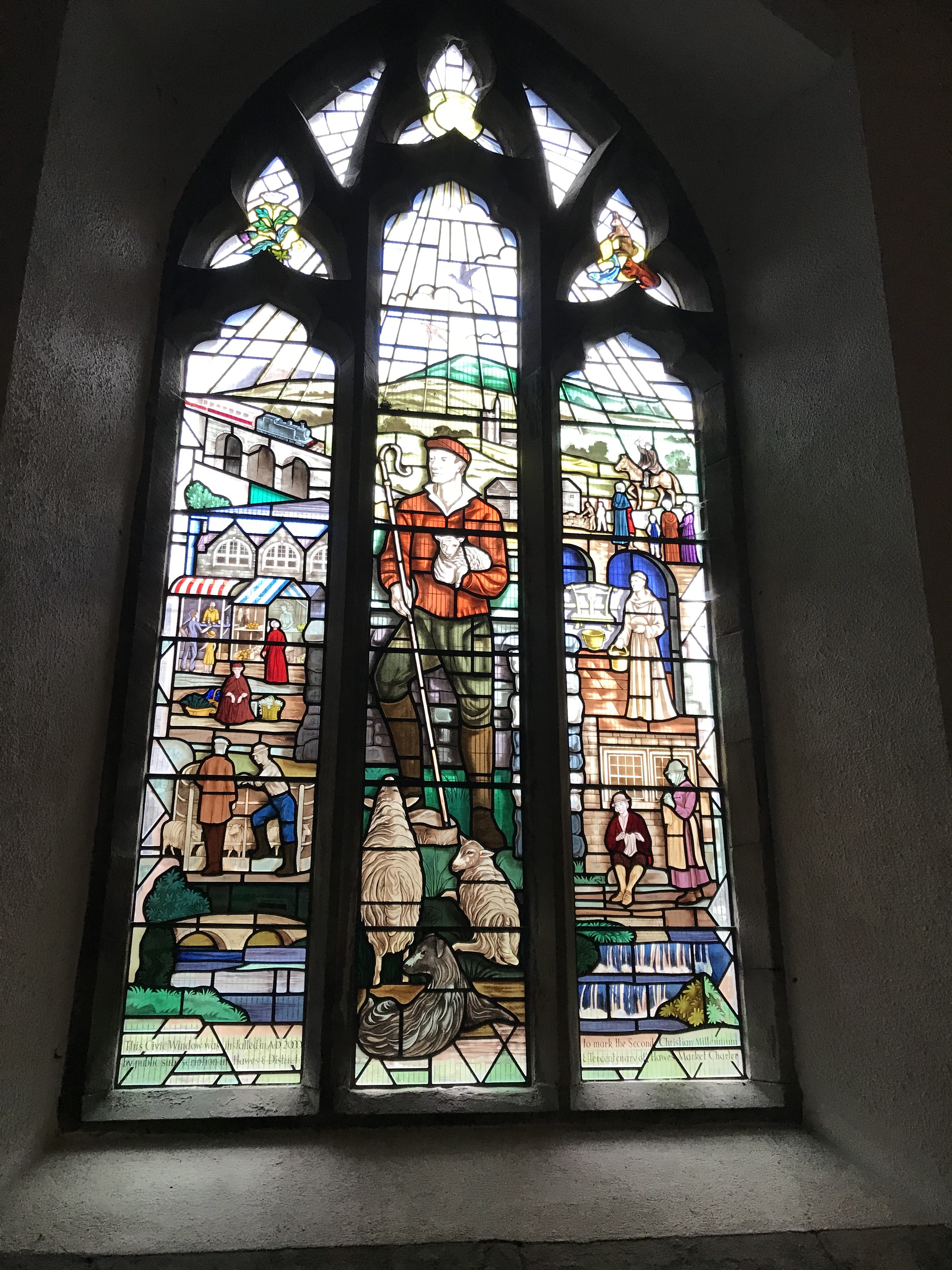 The millennium window is located in the south aisle of the church. The Parochial Church Council decided that to mark both the Christian 2nd Millennium of 2000AD and the Tricentenary of the granting of Hawes Market Charter it would like to replace one of the most severely damaged windows with an entirely new commemorative Civic Window depicting themes appropriate to the dale. A Millennium Window Committee was set up with representatives from the Parish Council, the Methodist churches and the business community. A distinguished stained glass designer, Mr Sep Waugh of York was invited for consultations. The cost was anticipated to exceed £12,000, and money was sought from the Market Tolls Trustees, who – ever since the Market Chatter was granted – have applied the rents for the open air Tuesday Market for the welfare of the town and its people. They responded very generously with a promise to pay for the entire central panel. The church itself also promised a substantial sum from its own resources and Mr. Waugh was then commissioned to make a design incorporating suggestions from local people.

The central motif was to represent the Good Shepherd and was in the guise of a modern Dales farmer which, from the outset, was seen as particularly apt since sheep-farming has been the staple of life and work here for a thousand years or so.

Numerous suggestions for scenes from local history, landscapes and activities were discussed and Mr Waugh incorporated many in his final. In due course, a general appeal was distributed to every household and business in the parish – including the outlying villages – promising that the names of all who gave would be inscribed in a Donors’ Book. This is now displayed in a case near the pulpit. The response was immediate and heart-warming. Enough funds were raised not only to design, make and install the window but also to erect the best available exterior protection. It was dedicated by the Bishop of Ripon and Leeds in a Festival Civic Service on Advent Sunday 2000.

The inscription at the bottom of the window reads:

This civic window was installed in ad 2000 by public subscription in Hawes and
district to mark the second Christian millennium and tercentenary of Hawes market charter.

The left hand light shows Appersett viaduct with a train going over it. Below that is the Market House with market stalls in front and ladies with shopping. Below are two men at the auction mart; and finally Haylands bridge over the river Ure.

The centre light depicts Jesus, strikingly as a modern day good shepherd, carrying a lamb, with the church of St Margaret, Stags Fell and Cotter End in the background.

The right hand light shows John Wesley preaching on horseback; the monks of Jervaux Abbey who introduced cheese making into the dales; the legendary “Knitters of Gayle”; and a waterfall. There are many in the dales including the highest in England behind the Green Dragon Inn at Hardraw.

The smaller lights depict flora and fauna of the dales, meadow flowers, curlews, a rabbit, squirrel and trout and surmounting all, “the Sun”.