The main body of the church contains some of its finest features – the superb oak furniture which, during the long incumbency of Canon Grice-Hill gradually replaced the original Victorian pitch-pine pews. It is all in hand-carved English oak, oak-pinned (not screwed) together, and most of it is either by Thompson, the famous ‘Mouseman’ of Kilburn – so called because his trade-mark was the tiny mouse he carved into all his work – or by his sometime chief assistant Lyndon Hammel of Harmby (whose own mark is a cat that has caught a mouse).  Robert Thompson was a late disciple of the Arts and Craft movement which advocated a return to traditional methods and materials, and even where the work is not by him or Hammel, it is in the same tradition. A careful scrutiny will reveal a wealth of delightful small carvings depicting the flora and fauna of the Dales, Christian symbols, and even the traditional Green Man (he isn’t immediately obvious). Since each panel has the name of its donors carved into it, few of whom were wealthy people, the whole forms an eloquent tribute to the many who worshipped here during the twentieth century. It is questionable whether any church has a finer collection of the Thompson school’s superb craftsmanship than can’ be seen here. Moreover, the pews are quite comfortable to sit in especially with the recently refurbished cushions – a rare boom! 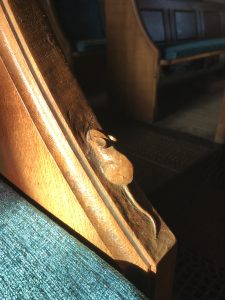 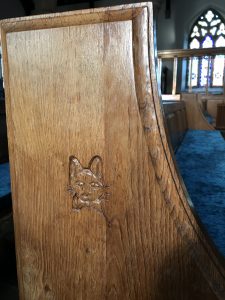 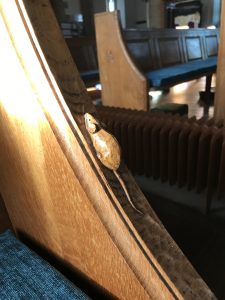