The Chancel and East Window 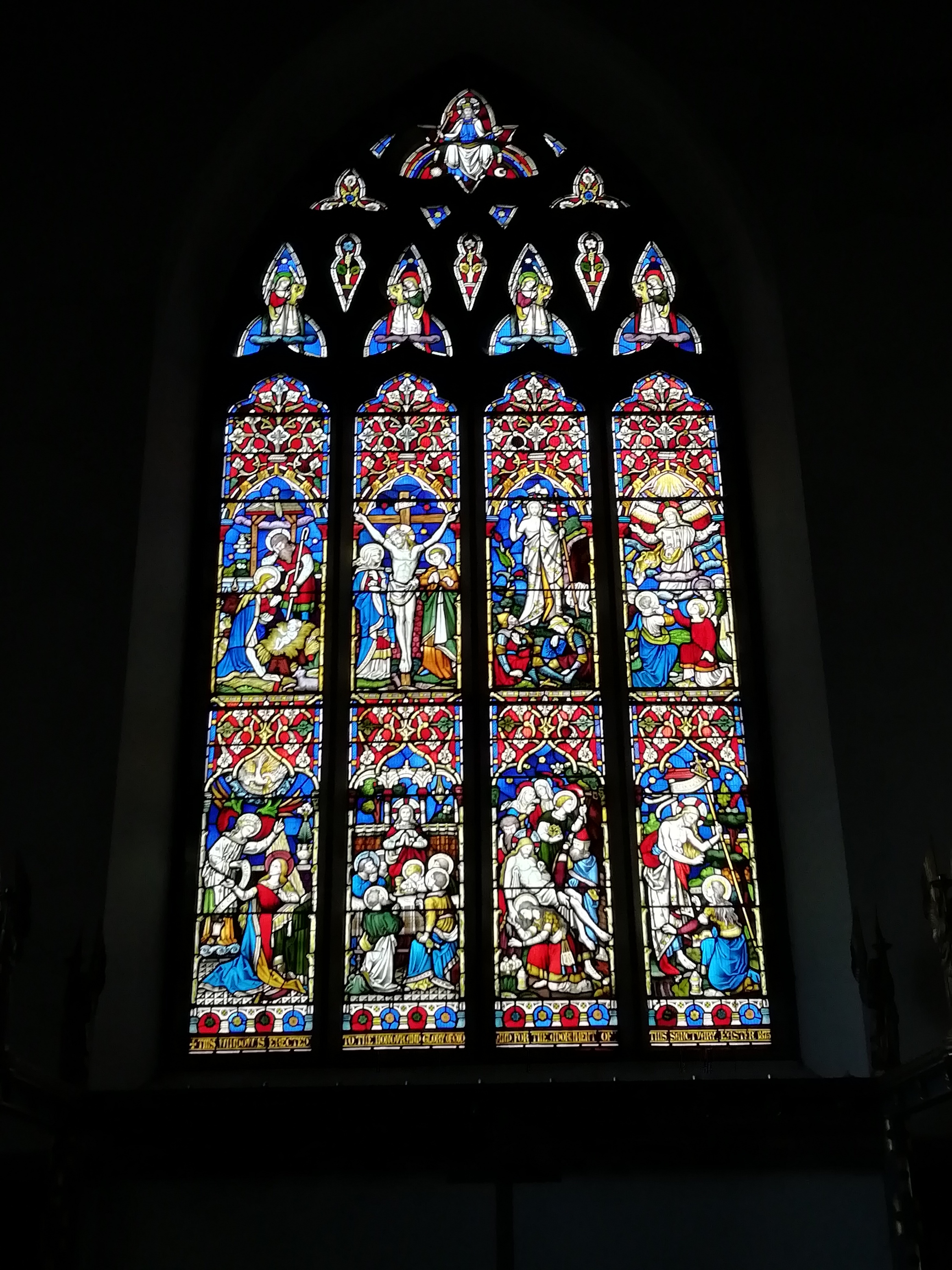 The East Window  was designed by Mr G J Baguley of Newcastle upon Tyne along with the Lady Chapel Window. (Parish Magazine of May 1873)

This window erected to the honour and glory of God and for the adornment of this sanctuary.  Easter 1873

Trace the story of Jesus’ birth, death, resurrection and ascension through the main eight panels in the window. (start in the bottom left) 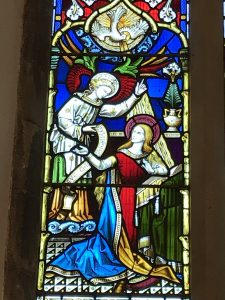 The Annunciation (bottom left). The account of this event is recorded in Luke’s Gospel, chapter 1. Mary is naturally fearful of the of the angel’s announcement but is reassured as Gabriel proclaims God’s favour and that he has chosen her to bear his son Jesus. The work of the Holy Spirit is represented in the window by the image of the Dove above the picture. Gabriel declared that Jesus 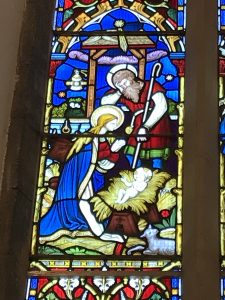 The Birth of Jesus (top left). Jesus’ birth (Luke chapter 2) is here depicted with Mary and Joseph looking on as Jesus lies in a manger – an animal trough. These humble beginnings help us understand some of the imagery in the account of the suffering servant of Isaiah 53 and the true nature of Jesus Christ who came to be our Saviour.

The lamb in the bottom of the picture reminds us that some of the first visitors and witnesses to this event were the shepherds. They had heard the announcement of the birth from the ‘Angel of the Lord’ as they were looking after the flocks in fields nearby. We remember also that Jesus is called the ‘Lamb of God’ and he was to become the true sacrificial lamb in his death on the cross where he paid the price for our sins. 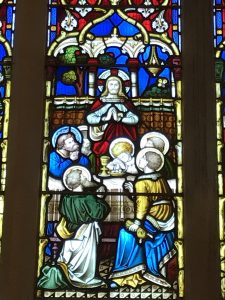 The last Supper (bottom middle left). Here Jesus is sharing the Passover meal with his disciples and he uses this time to describe the bread and wine as representing his broken body and blood to be spilt in his imminent crucifixion.

The cup of wine and the plate of bread are central in the picture with five of the disciples visible. Judas is one. He is shown holding a bag of money, for he had already agreed to betray Jesus to the chief priests. (Matthew 26 v 14ff)

The Crucifixion (top middle left). Jesus’ crucifixion is described in all four Gospels. The window depicts the Crucifixion scene with two of his disciples looking on.  Jesus is seen fastened to a wooden cross with nails through his hands and feet and wearing a crown of thorns on his head. When Jesus was being questioned before Pilate, he was flogged and the soldiers mocked him by making the crown of thorns and striking him in the face. (John 19) Pilate had a controversial sign made to put on the cross above Jesus’ head which read – ‘Jesus of Nazareth, the King of the Jews’

‘…. being found in appearance as a man, he humbled himself and became obedient  to death – even death on the cross!’ Philippians 2 v 8 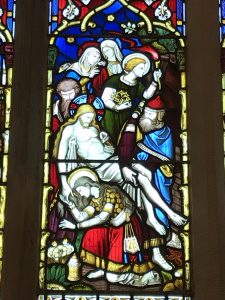 Jesus’ Burial (bottom middle right). This image depicts Jesus being taken from the cross late in the day of preparation before the sabbath. There are six characters shown helping in this event but the key actors would have been Joseph from Arimathea who provided the tomb for Jesus’ burial, and Nicodemus who had met Jesus late one night some time earlier. (John Chapter 3) He was a Pharisee but secretly a follower of Jesus. One of the disciples is shown carrying the crown of thorns that Jesus had been wearing and a lit torch as it was late in the day. At the bottom of the picture is a jar, possibly for spices that were put in the cloths that Jesus was to be wrapped in or it may  be for the spices that the women were to prepare later that night at home, after they had followed and watched where Jesus was being buried. 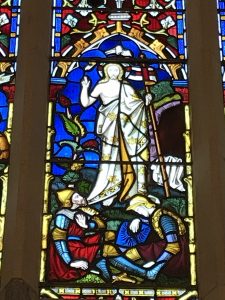 The Resurrection (top middle right). Jesus’ resurrection is seen in the image of the open tomb with the white grave clothes left as Jesus rose from the dead. The event was dramatic in every sense of the word. At the moment of the resurrection there was a violent earthquake and an Angel of the Lord came down from heaven to roll the stone away from the entrance of the tomb. The soldiers, shown here, who had been commissioned to guard the tomb were so frightened seeing this unfold that they froze as if they were dead. When the guards reported to the chief priests they were paid money to lie and spread a false account of these events. (Matthew 28) 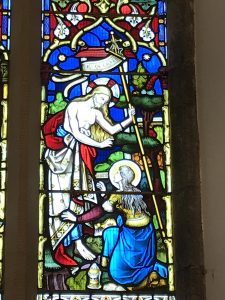 Jesus meets Mary in the garden (bottom right). Mary Magdalene had been one of the first to visit Jesus’ tomb early in the morning. Seeing the stone rolled away and the tomb empty, she ran to the other disciples believing that Jesus’ body had been taken away by someone. As the disciples dispersed after seeing the empty tomb, Mary stayed and saw the two angels who asked her why she was so distressed. Then Jesus appeared to her and when he spoke her name, she recognized him. Jesus said ‘I am returning to my father …. and my God…..’ and told her to tell the other disciples. Mary became the first witness and declared to them ‘I have seen the Lord’ (John Chapter 20)

In the picture of this encounter the nail marks in his hands and feet are visible as they were when Jesus later met with the disciples. The Jar of spices prepared by the women is at the bottom of the picture. 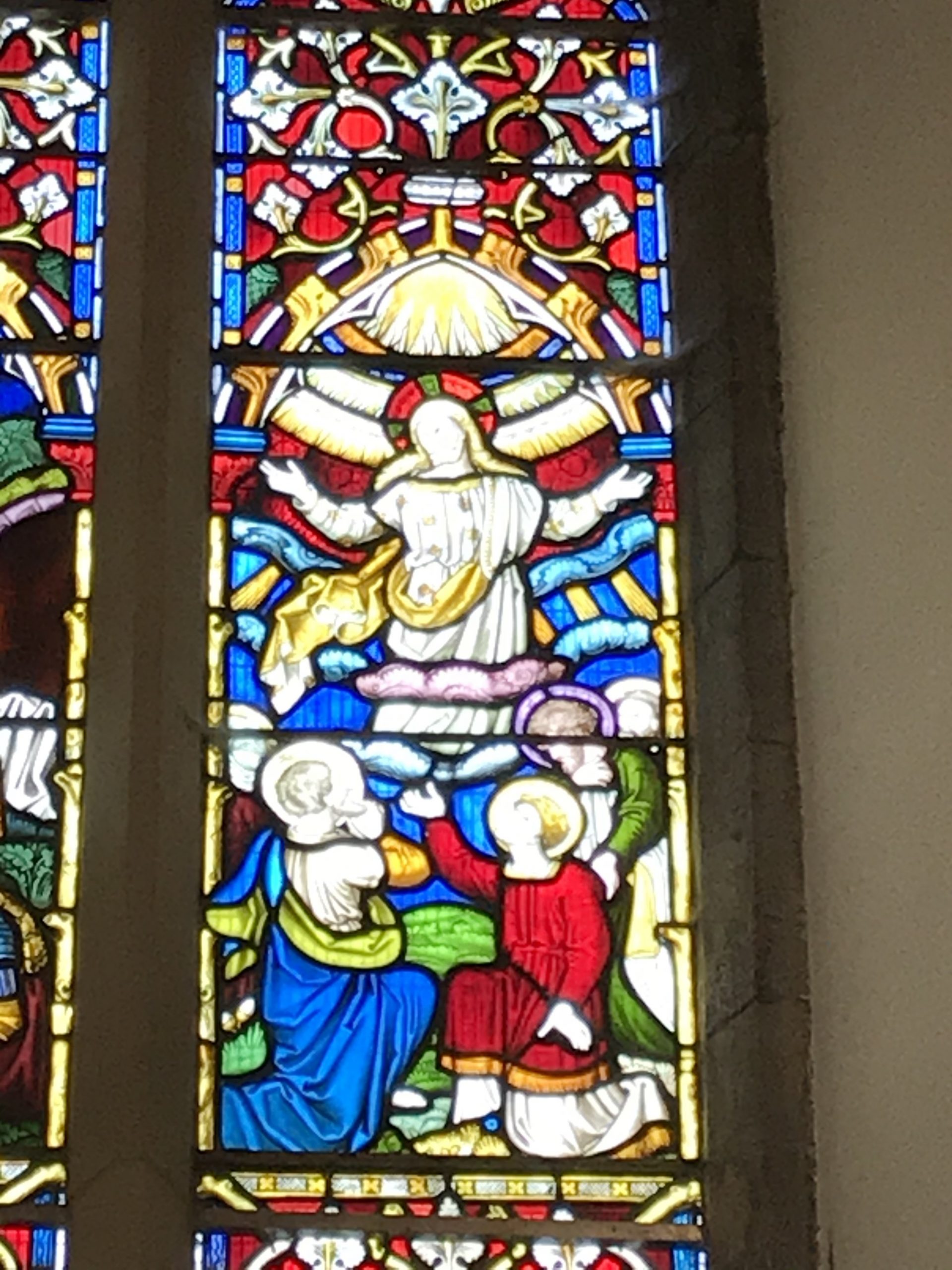 Ascension (top right). The account of Jesus’ ascension is found at the beginning of the Book of Acts. Jesus, meeting with the disciples told them that ‘…….they would receive power when the Holy Spirit came on them, and they would be witnesses in Jerusalem, and all Judea and Samaria, and to the ends of the earth’. Then as they watch, he was taken up into the clouds. As they stood amazed and looking into the sky, two men in white appeared next to them and declared that just as Jesus had ascended into heaven, he would return from heaven in the same way. 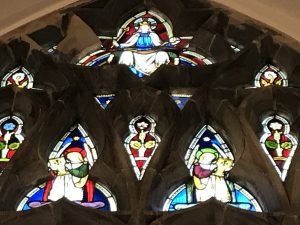 This event takes us to the top of the window where Jesus is depicted seated in Heaven, his sovereignty represented by the orb and mace that he holds. Below him are four lute playing angels. The account in the book of Revelation chapter 4 describes the Throne in Heaven and the One sat on the throne. The vision that John saw and recorded in his book was so amazing that he could only use some of the most precious stones he knew to describe the appearance of Jesus. He held a scroll in his hands which only he could open. There were four living creatures around the throne giving continual praise:

‘Holy, Holy, Holy is the Lord God Almighty, who was, who is, and is to come.’

The response of those elders watching on, was:

‘You are worthy, our Lord and God, to receive glory and honour and power,

for you created all things, and by your will they were created and have their being.’

To him who sits on the throne, and to the Lamb, be praise and honour and glory and power for ever and ever’

The image of Jesus sat on the throne is shown within in three cornered piece of glazing and below it are two similar shaped bits of glazing surrounded by stone. This pattern is seen in all the windows in the church. The image reminds us of the Trinity – God the Father, God the Son and God the Holy Spirit – the basis of our faith.