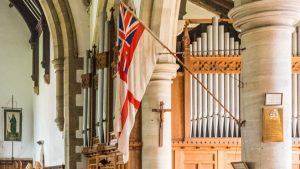 The ensign of the HMS Wensleydale has been in St Margaret’s church for nearly 30 years. It was lowered by Able Seaman John McLeod on 17th May 1945 and he kept it until 1992. The flag was hung in the south side of the chancel until recently. It has been renovated and is now displayed in the north aisle in an oak cabinet made by Terry Harrington. The restoration was paid for from donations from the British Legion and collections at the remembrance services. 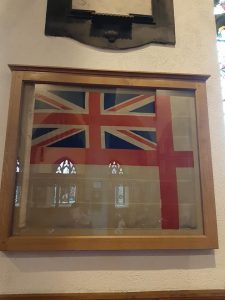 The Brass Plaque shown in the photograph reads:

In proud and affectionate memory of a fine ship, her valiant service and happy company unveiled in the presence of former shipmates on the fiftieth anniversary of commissioning 24th October 1992. Battle Honours: Normandy 1944; English Channel 1943 – 44; Atlantic 1943 – 44; North Sea 1943 – 44

HMS Wensleydale was a Type III Hunt Class Escort Destroyer. It was one of 86 built and they were named after English Foxhunts. It was fitted with 4, 4inch guns, 4 2pdr pom poms, 2,21inch torpedo tubes and carried around 110 depth chargers. It was designed as an anti submarine and anti aircraft escort for convoys.

Wensleydale was built on the Clyde by Yarrow’s of Scotstown, Glasgow and commissioned in September 1942. She sailed first in November for Tobermory on Mull to participate in training exercises and then to sea going trials in the Scarpa Flow. 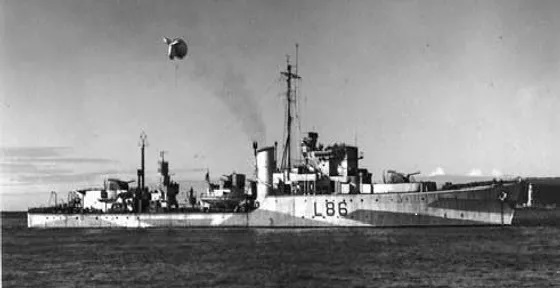 Early operations involved escorting convoys to Gibraltar, taking wide routes into the Atlantic to avoid U Boats (but not the 40ft Waves!). Long range escorting finished in early 1943 and following that Wensleydale was based around the channel ports -mainly operating in the channel and the North Sea, beginning by rescuing downed aircraft and airmen. Ongoing, she was involved with several training exercises, action against German E boats, patrolling Convoy routes, providing anti-submarine escort for battleships, assisting in mine sweeping and battles with German minesweepers. In September 1943 Wensleydale took the Commodore on board and was part of Operation Starkey – a rehearsal for D Day. Wensleydale was involved in exercises at Slapton Sands and Lyme Bay where E boats had sunk shipping with a large loss of American lives. She also provided cover for American landing on Omaha Beach 6 June 1944.

On the night 20/21st of November 1944, Wensleydale left Sheerness to take up an anti E-Boat patrol line on the Dutch coast. However, because of adverse weather it was decided that E-boat activity was unlikely. Therefore, Wensleydale was ordered to anchor for the night, off Southend. During the night, the ship was rammed on the port side. Water flooded the engine and gearing rooms. The port side and upper deck plating from frame 88 to 98 was indented, buckled and fractured to a depth of six feet on the upper deck for nearly half her length. This damage was caused by the Royal Navy operated LST 367 (Landing Ship Tank)

As a result of the collision the ship was reduced to category “C” reserve on 17 December 1944; and declared a Constructive Total Loss. However, on 28th February 1945, she was upgraded to category “B” reserve which suggested that the intention was to repair her. Nine months later, on 8th of November 1945 she was approved to scrap.

On 6th March 1946 she was again reduced to category “C” reserve at West Hartlepool and three months later, on 29th June 1946 she was placed on the sale list to a scrap yard. On 25th February 1947 Wensleydale arrived under tow at her final resting place; the yard of Hughes Bolckow, in Blyth; where she was broken up for scrap.

Wensleydale was a beautiful ship, it could travel too. Everything about her was of the latest design, as was proved a few times when we had to find an aircrew that had come down in the Channel…… All this time I was on the Wensleydale from the time I saw her in Scotstoun being built to the time I had to leave her, I was happy – A good fighting ship, everyone gave as good as they could to do what we had to do.

For fuller accounts of specific engagements, details of some of the officers and crew and their memories see the web site compiled by David Allen https://www.hmswensleydale.co.uk/

Permission to use the above details – David Allen