Early Faith in the Dales

In the 16th Century the Church of England had become the established church in England, but there were those who didn’t conform. This included the Catholics who in many areas were driven underground seeing some revival with initial changes in the monarchy. Other ‘Non-Conformists’ included the Quakers, Baptists and the Congregationalists. 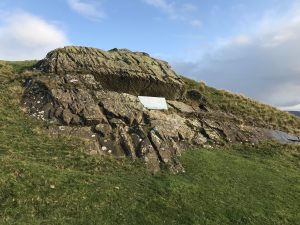 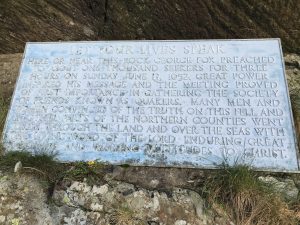 The Quakers were established during the 17th Century. Through their leader, George Fox, they rejected the rule of the bishops and liturgies set by law. George Fox visited Wensleydale several times and he famously preached to around 1000 people at the place known as ‘Fox’s Pulpit’ (Grid reference SD 619937) on Firbank fell near Sebergh in 1652

They believed in divine guidance that they called the ‘inner light’. They objected to paying tithes and the church rate and consequently found themselves in conflict with the authorities. Meetings were held in private houses and did at times result in the householders being fined £20 and individual participants being fined 5 or 10 shillings each. They became a people set apart because of their puritanical strict disciplines.

Significant local families were the Robinsons of Countersett, and the Rouths of Appersett and Hawes. Well to do families which gave them some credibility include the Hillary’s of Burtersett and Fothergills of Carr End

The Conventicle Act 1664 and Five Mile Act 1665 were passed to restrict activities of groups like the Quakers. These acts of parliament were designed to prevent religious assemblies of more than 5 people meeting outside the auspices of the Church of England and to prevent a minister expelled from the church living within 5 miles of the place he used to preside over, unless he swore  again to obey the 1662 prayer book. During the reign of William and Mary, the Act of toleration was passed in 1689 which gave the right to worship and build meeting houses.

In Bainbridge a cottage that had been bought earlier was now freely used from 1689 Onwards.  The present meeting House was built in 1836 and is still being used today.

In Hawes and Appersett early meetings took place in the Routh’s home. (Oswald Routh left land for a burial ground in Hawes at Town Foot, opposite the playground) By early 1700 a cottage was purchased for a meeting house in Hawes and continued to be used until 1920. In 1955 the property was demolished for road widening. 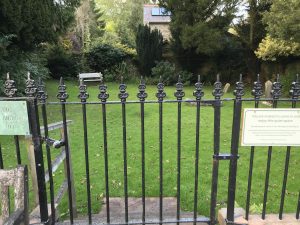 The graveyard remains, but is unused though it is open as a ‘quiet space’ for people to use. Thomas Fawcett, a quaker in Hawes, is reputed to have built a cottage in 1668 – now Cocketts restaurant with an inscription above door  which reads ‘God being with us – who can be against us’ – words taken from Romans chapter 8.

In Appersett a property on left as you enter from Hawes was possibly a meeting house with its burial ground on the corner opposite. (It was a custom for every meeting house to have a graveyard). This may have been used by Sandemanians as some of the Willans family in Appersett were Sandemanian and they were buried in Gayle. The cottage was later used by the Methodists

The Quakers grew in numbers during 18th Century but decline into the 19th as a result of growth of other non-conformists and significant emigration to America. Some found the strict discipline and some of the marriage rules hard – you could only marry within the  sect.

During the 18th century several revivalist movements developed and among them were significant evangelists including John Wesley, Benjamin Ingham and George Whitfield. Benjamin Ingham traveled widely in the Dales and Westmorland and he establish several societies and chapels. The Batty Brothers and James Allen built an Inghamite chapel in Gayle during the 1750’s with a Sunday School later being established in Dyers Garth, in Hawes. 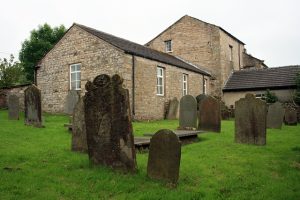 Not long after the establishment of this chapel they became followers of Robert Sandeman and the building became a Sandemanian Chapel.

The sect of Sandemanians originated in Scotland. John Glas was a Presbyterian Minister and he was unhappy with the national church whose organization, he claimed, found no support in the new testament. He established his own church and they were called ‘the Glasites’. His son in law Robert Sandeman became a leader in the church and brought the church to London England and America. The Sandemanians where very strict in the observances and quite exclusive. Their first developments outside London occurred in Yorkshire, when James Allen and Willian Batty were encouraged by Benjamin Ingham to go to Glasgow to observe the Glasites in 1761. They were so impressed with what they saw, returned and established a Sandemanian meeting houses in the Gayle chapel as well as Kirby Stephen, Newby and Kirkby Lonsdale. By 1768 James Allen had helped establish church congregations in York, Norfolk and Colne.

In Gayle, two services were held each Sunday with the Lord’s Supper being administrated to the faithful in the morning and a Gospel service in the afternoon. In between they had a common meal at the Old Hall, the home of the Allen family. Services ceased towards the end of the 19th Century and in 1929 the chapel became the village institute. The graveyard is next to it.

For a fuller account of Benjamin Ingham’s life and witness in the Dales and his links with John Wesley and James Allen, as well as the Moravian Church, visit the Website of Salem Congregational Church, Martin Top. https://www.martintop.org.uk/content/benjamin-ingham

Congregationalists are another group of Protestant Separatists who advocated separation from the Church of England rather than further reform. Their church structure emphasised the right and responsibility of each congregation to manage its own affairs. In many ways, structurally and theologically they are similar to the Baptist church. Their roots lie in the 16th Century, but they became more prominent during the 17th century. Separatists experienced mixed fortunes in the early years, suffering persecution during the reign of Elizabeth I, receiving greater support with Oliver Cromwell, increasingly difficult times following the Act of Uniformity of 1662, support at the time of the Toleration act of 1689 during the reign of William and Mary, problems during the reign of Queen Anne when the schism Act threatened the survival of the Congregational schools, and a final period of stability when George I came to the throne (1714). At the start of the 18th Century the rise of Methodism and later the Evangelical Revival (1750 – 1815) had a significant impact on Congregationalism. George Whitefield had close relations with the Congregationalists.

Chapels in the Dales 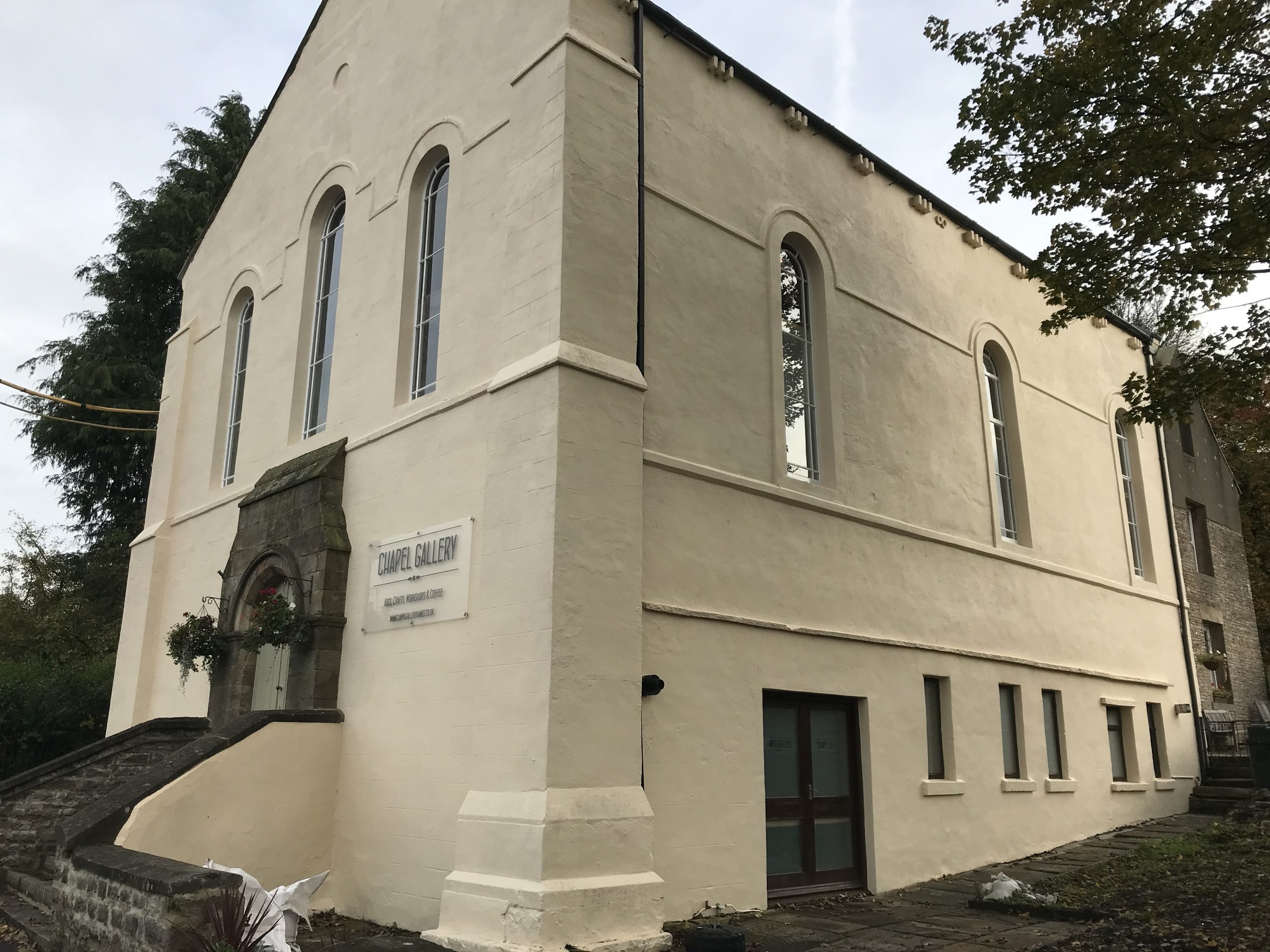 Hawes Congregationalists began in 1843 with Rev W Palmer becoming the first Minister and he was succeeded by Rev J W Rolls in 1846. They took over Dyers Garth Sunday School from the Sandemanians and during these early years numbers grew rapidly from 11 to 76 so that by 1849 they decided to buy land to build their chapel. The chapel was completed in 1851 (the same year as the new parish church). It was known as Bethel meaning ‘House of God’ and became the centre of Evangelistic activity with services being held in many surrounding villages. The centenary celebrations were held in 1943. The Bethel Church in Hawes became part of the United reform Church when the Congregation Churches in Britain merged with the Presbyterian church in 1972. The chapel is now closed and has been used as a Gallery for some time.

The Baptists developed out of 17th Century puritanism and trace their roots to the Anabaptist movement (Mennonite) in Amsterdam. Their theology was Calvanistic and the church structure was akin to the Congregationalists. Particular Baptists (as opposed to General Baptists) were non separatist in that they didn’t totally deny the position of the established Church of England, though felt the need to be independents.

There is no evidence of a Baptist Church in the Dale beyond Snape near the entrance to Wensleydale. In developing their churches, the Baptists bypassed the dales and developed their congregations in the Northallerton gap and northwards into county Durham.

However in 1840’s Robert Capstick of Burtersett was described as a Baptist minister. He ran the shop and probably held services in his home. They were known as Particular Baptists and conducted baptisms by total immersion in the river Ure.

John Wesley was born in 1703 – the 15th child of Samuel Wesley an Anglican Minister at Epworth in Lincolnshire. John himself became an Anglican priest in 1728. Ten years later, he and his brother Charles had what they described as a ‘spiritual awakening’ at a Moravian meeting in Aldersgate, London on 24th May 1738. He described this evangelical conversion as ‘his heart being strangely warmed’ and he gained an assurance of his salvation. With the encouragement of George Whitfield, he began his ministry as a travelling evangelist, mainly preaching outdoors. He never intended to establish a separate church. Early followers were expected to go to parish church for communion, but later, societies were formed with afternoon and evening meetings arranged. Eventually, Wesley ordained his own ministers and began to build chapels. By 1791 when Wesley died – separation was complete and the Methodist church had been established.

John Wesley visited Wensleydale in 1743, 1744 and 1774 and preached at Wensley, Redmire and Castle Bolton. In 1765 a minister was appointed in Middleham and by the end of the century a circuit was established in the Middleham area extending west as far as Bainbridge.

Methodism came to the upper dale from Kendal and Sedbergh (Wesley had visited Kendal several times) and an early society was formed in Garsdale. Between 1825 – 35 Garsdale miners came to Gayle to work at Storth pits and the Methodists among them began meetings. The chapel in Gayle was built in 1833  and was part of the Kendal circuit. When a Sunday School was built in 1855  it is recorded that there were 16 teachers and  50 scholars  with 54 church members. In 1879 the chapel was extended with a new front and gallery. Gayle chapel was noted for evangelistic missions, their band of hope, class meetings and open air meetings. 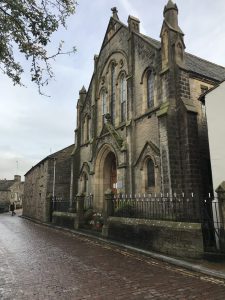 Hawes chapel was built on land given by William Whaley in 1856. It had a similar plan to the ‘Bethel’ Congregational church. Problems with damp in the lower ground area resulted in it being demolished and rebuilt in 1913. The first organ installed was a memorial to the first world war.

In 1871 Hawes became an independent circuit and included Bainbridge, Askrigg and Marsett. It later amalgamated with Middleham and Leyburn in 1901 becoming the Wensleydale Circuit  with 3 ministers. Cottage meetings were taking place at  Birkrigg, Lunds, Worton and Appersett (in the Quaker meeting house). Burtersett chapel had been built in 1874 and was enlarged in 1904 as the local quarries expanded. The Methodists were worshiping in Widdale for some time during the last century using the congregational chapel. Having stood empty for a long time, this is now being converted into housing.

In 1810 revival meetings at Mow Cop in Staffordshire resulted in the establishment of the Primitive Methodists who in part were attempting to get back to the simplicity of the early Methodists and maintain the evangelistic traditions and focus.

Hugh Bourne and William Clowes were prominent leaders in this movement. The ‘prims’ attracted working class adherents with their simple, plain design of their chapels and their direct, spontaneous and passionate worship. They were often called ‘Ranters’ due to their more charismatic style. They were keen temperance advocates and involved in social reform programmes.

Primitive Methodists created their own circuits and built chapels. In 1822 a Middleham circuit was established with 12 Sunday Schools and 20 meetings in cottages. The first chapel was built in Cotterdale by 1836. By 1870 a Primitive Methodist Society existed in Hawes and chapels were built in Askrigg (1869), Sedbusk (1875), Bowbridge and the ‘Prims’ were using the Quaker meeting house at Countersett. The Methodist Union of 1932 saw the two circuits joined, though in some parts of the country, including East Yorkshire, a small number of Primitive Methodists ‘continued’ in their own right.

Acknowledgements to James Alderson ‘Under Wetherfell’

1972      United Reform Church formed between the Congregationalists and Presbyterians