The crucifixion and resurrection of Jesus are fundamental to our faith and it is not surprising that the events represented in our church windows reflect this. On the south side of the church there are three stained glass windows which depict different aspects of the resurrection theme.

The apostle Paul in discussing the importance of Jesus’ resurrection writes:

…. if Christ has not been raised, your faith is futile; you are still in your sins. 1 Corinthians 15 v 17

Two of the windows were erected by Margaret Winn in memory of her parents.

George Winn, was born in 1808 in Nappa Hall. In the 1840s they family went into lead mining nearby. He married Elizabeth. In 1841 he decided to build a house in Askrigg calling it Winnville (now the White Rose Hotel) and to show his standing he had 2 stone lions put on the pillars of the coach entrance. He also built some cottages in his courtyard. He was one of the ‘Four men of Askrigg’ (those looked after the Market & Toll House from the 17C). He died in 1880. (aged 72). Elizabeth died in 1898 (aged 84)

The windows illustrate some of the events surrounding Jesus’ resurrection as described in the Gospels of Matthew and John. 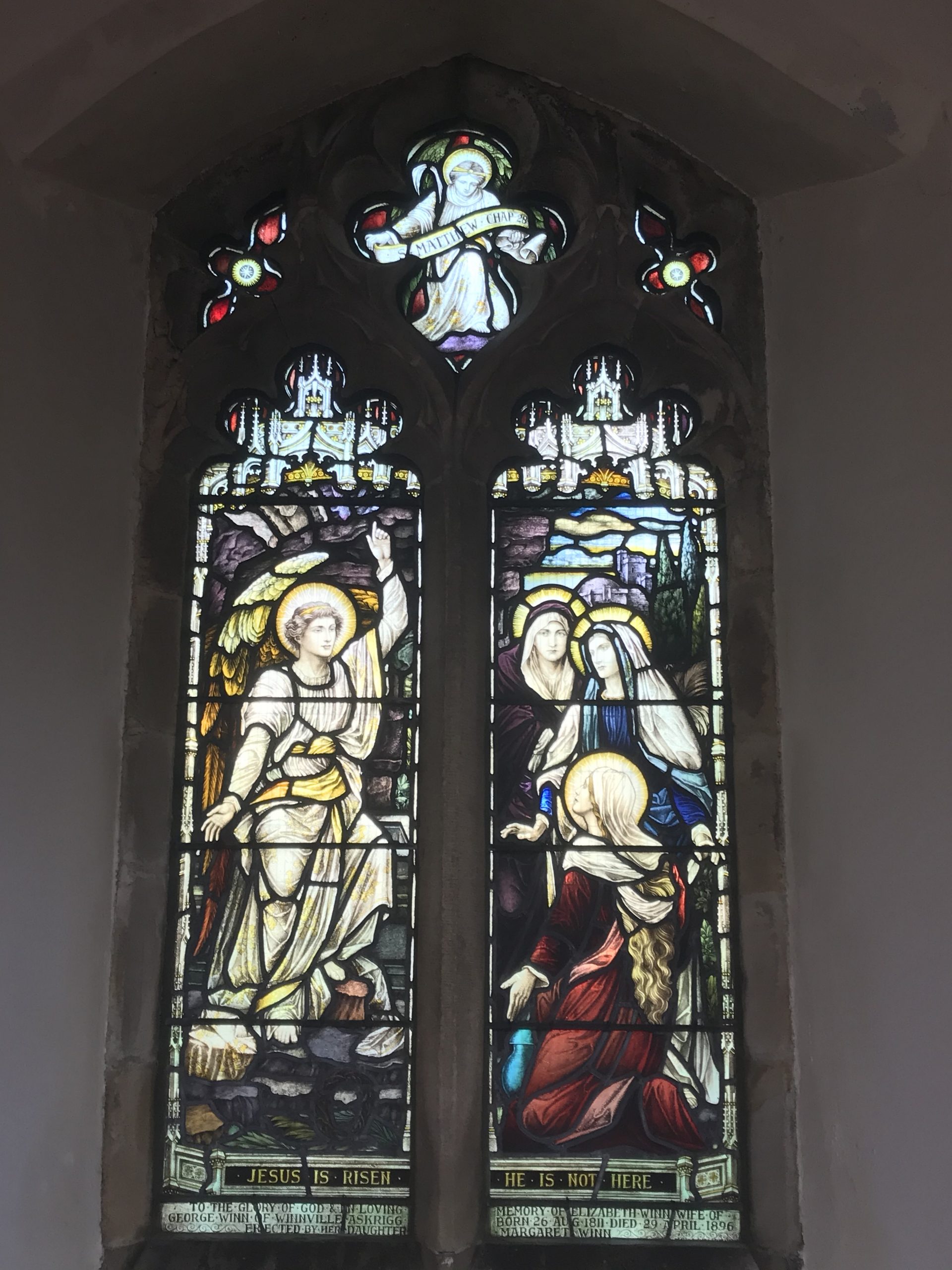 One these windows shows the events that took place first, early on the Sunday morning following the crucifixion. At the top of the window we are told the window describes the events recorded in Matthew chapter 28. Mary Magdalene and Mary the mother of James set out at dawn to visit Jesus’ tomb and pay respects. In Mark’s gospel we are told that Salome accompanied them and that they took spices to anoint the body of Jesus. These three women are seen in the window and at the bottom the jar that would have contained the spices. It may be difficult to understand the sequence of events, but there was a violent earthquake, an angel of the Lord came from heaven to move the stone that covered the tomb and he was present when the women arrived. The angel is depicted in the window speaking to the women and his words are recorded at the bottom. ‘He is not here. He has risen.’  The women saw the empty tomb and, on their way to tell the other disciples Jesus met them in person, proving to them that he was alive. 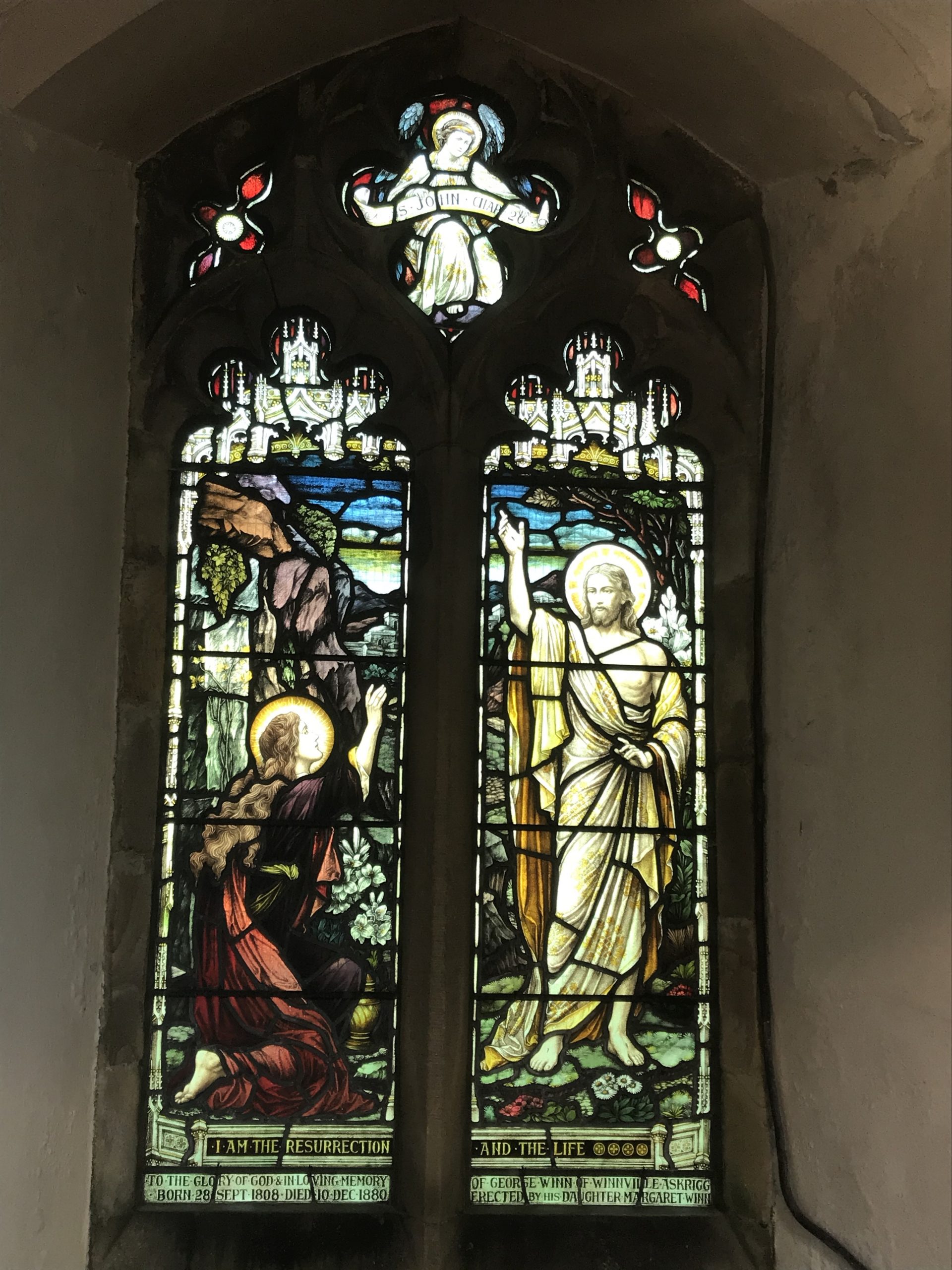 The other window shows the risen Jesus meeting and talking to Mary Magdalene outside the tomb. The events are recorded in John’s gospel, chapter 20. Mary’s distress at seeing the empty tomb and initial disbelief is dramatically changed as she gradually recognizes Jesus’ voice. Her joy at this encounter is evident as she runs to the other disciple and declares ‘I have seen the Lord’

Written at the bottom of the window are the words that Jesus spoke to Martha in Bethany.

‘I am the resurrection and the life’

These words are recorded in John chapter 11 when Jesus arrived in Bethany to comfort Martha and Mary after their brother Lazarus had died. 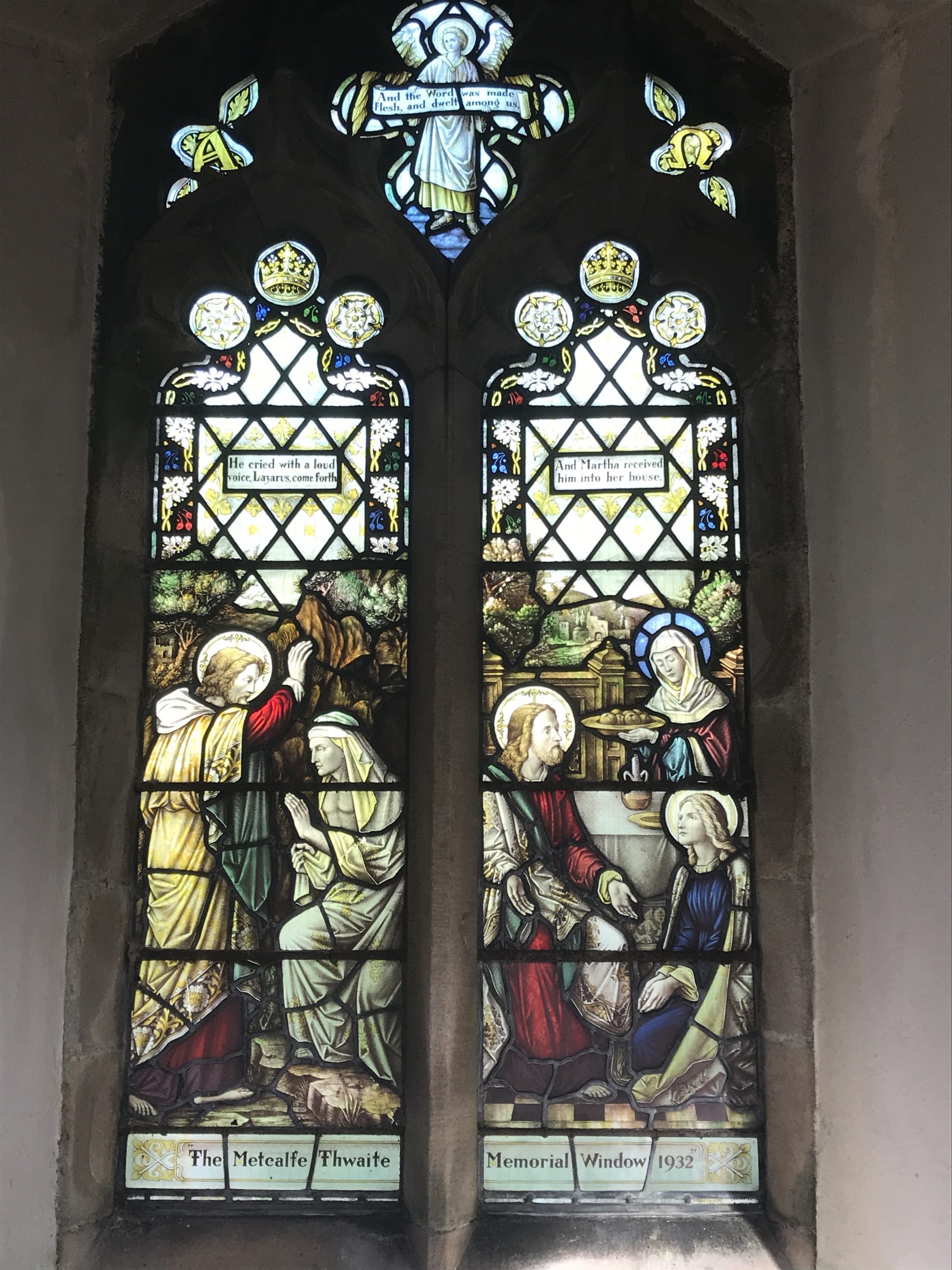 The Metcalfe Thwaite Memorial window (1932) shows the two occasions when Jesus went to the home of Martha and Mary. Jesus is first introduced to us in the words at the top of the window. …and the word was made flesh and dwelt among us.

On the first visit to Bethany (Luke 10), Martha invited Jesus into their home and spent time preparing the food as shown in the right panel. Mary in contrast sat at Jesus feet listening to his every word. The town of Bethany is seen through their ‘window’ in the background.

The second visit to their home saw the dramatic events of Jesus raising Lazarus from the dead (John 11). Martha went out to meet Jesus as he approached the town. Jesus assured her that Lazarus would rise again but she didn’t fully appreciate what Jesus meant. Jesus was deeply moved by the events of that day and as he approached the tomb where Lazarus had been buried, seen here in the left panel, he told the mourners to remove the stone that closed the cave. Calling to his father in heaven, Jesus prayed that all might know that that he was sent from God. He then called for Lazarus to come out. There would have been great rejoicing that day as people met Lazarus and began to worship Jesus.

We don’t know how much longer Lazarus lived, but we do know that after God raised Jesus from the grave, he ascended into heaven and now sits on the throne where he is continually worshiped: